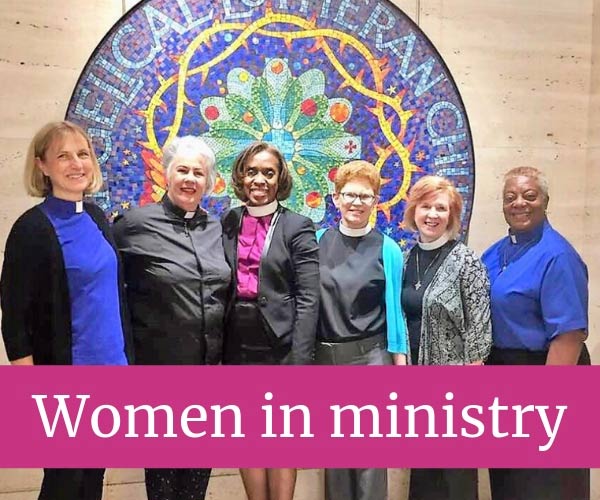 On the day this article is published, I and all the bishops from Region 9* will be in Puerto Rico along with our facilitator, Dr. Mindy Makant, deacon, of Lenoir-Rhyne University and the NC Synod, to discuss, affirm, and work out logistical possibilities based on a document formulated in a series of meetings by female bishop’s staff members throughout Region 9. This document seeks to find a productive way forward more intentionally to address systemic challenges faced by women in ministry. Eighteen months ago at the NC Synod Bishop’s Staff retreat I made the uncomfortable and not entirely popular observation that we were having trouble putting forth names of women for call committees looking for senior pastors of multi-staff congregations. Was it that “qualified” women weren’t available? Was it that what congregations and I have defined as “qualified” is skewed by the patriarchal lens through which we and I view the world and the church, thereby undervaluing and overlooking historically “feminine” gifts? Was it because the female names we did put forward often made it to the second round but rarely were the ones called? All of the above?

We vowed at that retreat to gather the women who are rostered ministers in the NC Synod to hear from them as to the roadblocks they experience as women. Over the next year, we hosted four gatherings. You may have seen the “Seriously?” video that precipitated from these meetings almost a year later. Some have challenged our (condescending/patronizing) decision to lend male voices to inappropriate things that have been said to female clergy. The answer is simple. At our very first meeting, the sad observation was made by women that if they made a video with their voices, they would be labeled as whiny. (Other adjectives were suggested.) Our sisters at that meeting asked that we take what they’ve heard and invite male colleagues in ministry to read those on a video. The “Seriously?” horrified response from one of the male readers was not because such things are said—he’s married to a rostered minister. He knows. Rather, his response was in disbelief and major hesitation that he was being asked to SAY it on a video, since it was indeed so terribly offensive!

Meanwhile, the #metoo movement followed by the Kavanaugh hearings happened, and awareness was heightened. The 50th anniversary of the ordination of women in the ELCA and its predecessor bodies (2020) was quickly approaching, and the ELCA proposed social statement “Faith, Sexism, and Justice” was finalized for consideration in August 2019 by the ELCA Churchwide Assembly. After “Seriously?” took on a life of its own with over one million views, our synod realized that we couldn’t just leave it there. Several NC Synod female staff invited rostered synodical female staff members in Region 9, including Bishop Idalia Negron Caamano of the Caribbean Synod, to gather multiple times to discuss ongoing challenges and ways forward. These female leaders in late 2018 applied for and received an ELCA grant to help Region 9 address challenges facing women in ministry. Our bishops’ meeting is happening now as part of that grant to address the specific issues this regional female group has put before us, including striving to standardize practices around boundary training and call process to be more conducive and supportive to women in ministry.

In this year of Luke’s Gospel, we see there that Mary is God’s faithful and willing servant to bear the Christ, that the woman with the hemorrhage is Jesus’ example of great faith, that Mary and Martha are leaders in the Jesus movement, that the women are the ones at the tomb when all the men flee and the first proclaimers of the resurrection news (though the men ignored that as an “idle tale”). Luke also writes Acts in which we see Paul establishing churches everywhere, leaving fully half of them in the hands of female leaders, some of Paul’s (or pseudo-Paul’s) own written advice notwithstanding.

We give thanks for the gifts of women in ministry, rostered and otherwise. Those of us saturated in systemic and default-mode patriarchy strive to become more aware of our privilege, confess our sin that has robbed and is robbing the church of many amazing female leaders, and vow to do better. I urge you to hold my feet to the fire, join me in that prayer, and walk with me in that intentionality of better living out the fulness of whom God has called us to be.

*Region 9 of the ELCA is made up of six synods: Virginia, NC, SC, Southeastern (TN, GA, AL, MS), Florida-Bahamas, and Caribbean (Puerto Rico and the Virgin Islands)