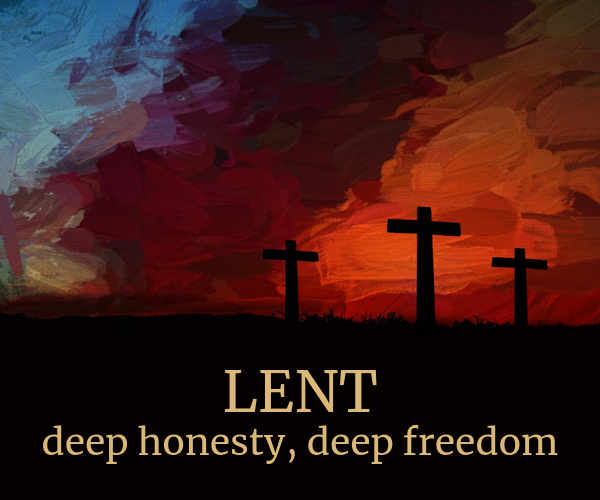 In the 8th chapter of John, Jesus promises us that “if you continue in my Word, you shall know the truth, and the truth shall set you free.” Of course, his audience argues with him. “Set free? Whatever do you mean? We’ve never been slaves to anyone or anything!” (my paraphrase) Apparently the same truth that sets us free also stings to begin with. What difference does a declaration of freedom make if we don’t even realize we are bound?

But bound we are. To sin, from which we cannot free ourselves. To mortality, which is where we’re all headed. And because the only things we know for certain are that we will die and that between now and then we’re sinful, we are perilously close to meaninglessness and despair. What difference does it make? I’m going to mess up, and then I’m going to die.

I wish I had a nickel for every parishioner I’ve had through the years who told me they hate Lent. “It’s too dark! It’s depressing! It’s morbid! It’s cruel! I need my Sundays to be upbeat, because the rest of my week is usually a downer.” But, as twentieth century theologian Paul Tillich reminds us, every no is a yes, and vice-versa. When our daughter and son-in-law embraced their twins in love (yes), they also said “no” to sleep, her income, and spontaneous evenings on the town. On the first Sunday each Lent, we read of Jesus saying no to the devil three times before he can say yes to his earthly ministry ahead of him. In our own baptism, we say no three times as we renounce the devil, worldly power, and sin before we say yes to believing in God as Father, Son, and Holy Spirit.

Lent begins liturgically with our intentionally walking to the front of a church on an otherwise normal Wednesday to have someone smudge an ashen cross on our face as they look us in the eye essentially to tell us, “You are most certainly going to die. You, by yourself and regardless of your accomplishments and relationships or the lack thereof, are no more than the dust on your forehead. Get over yourself.” Immediately prior to that we engage in an extended and detailed confession of our sins. Such deep and painful honesty is the beginning of repentance, of embracing another way, the only hopeful way, the way of Christ. Only in Christ is sin forgiven. Only in Christ does death not have the last word. In the deep honesty of embracing the great no of sin, death, and the devil, we are set free to embrace the yes of new and abundant life in Christ. After all, “Lent” means “springtime.” Hope. Renewal. New life.

Speaking of no and yes, instead of “giving up” (saying no to) something this Lent, consider “taking on” (saying yes to) something else this Lent. A few years ago I received a note during Lent from a long-ago parishioner who took on as her Lenten discipline getting up 15 minutes earlier each morning except Sundays to say a prayer for and write a thank-you note to someone who had made a significant impact on her life. Forty notes that made a difference for someone else and helped her to express her gratitude. Cumulatively, ten hours less sleep.

Lent’s deep honesty calls us to deep freedom. To what are you being called to say no in order to embrace a more abundant and hopeful yes? Lent isn’t about dying, at least ultimately. It’s about living, and it always heads toward Easter. The no and the yes go together. Blessed Lent, blessed living, to you.