How toddlers are renewing my faith 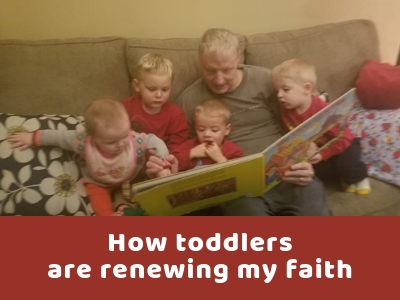 How toddlers are renewing my faith

Those who follow me on social media will realize that I am obsessed. It’s our grandchildren—all four of them who have arrived in the past three years, and three of whom arrived in July of 2016 within a span of eight days. Honestly, I used to secretly believe that all the grandparenting hype—sharing pictures and telling stories ad nauseum—was way over the top. But now I, a past president of the Anti-Sentimentality Club, am in a whole new place. A bit of an uncomfortable yet wonderful place, to be honest.

As has been the case more times than I care to admit (and growing by the month) I was wrong. The joy of grandchildren, though it certainly hinges somewhat on the cuteness and sentimentalism factors, is about way more than that. It is for me, I’m realizing, a chance for an aging, white, male with tendencies toward worldly cynicism, to see the world once again through more innocent, hopeful, faithful eyes. And that, for me, has been and is a most blessed thing.

Both the Psalmist and Jeremiah claim that before we were formed/knit together in our mother’s womb, God already knew us. (The same Hebrew verb that connotes such deep intimacy that it is used elsewhere as a euphemism for sexual relations, e.g., “Adam knew his wife, and she bore a son.”) If that’s so, then there is something about our deepest identity in God that culture and our own imagined sophistication weeds out. Somewhere, somehow, before the foundations of the earth itself, we already were in the mind and heart of the eternal God. Before the eternal Word that calls into being all things (“…and God said, let there be…”) I was, you were already. That this word became flesh, as did we, is evidence that God continues to seek us out and desperately desires that we find our guide for living in the Christ who redeems us who IS that Word incarnate that creates us, redeems us, and calls us home.

I forget. But the toddlers, and I, through them, remember. One of our own children, at about the age our three grandboys are now (30 months), was with me a generation ago. In a dense fog, we took an exit ramp off of Interstate 85 and couldn’t see a thing. We found out the hard way that it was a sharp curve ramp by going straight, going airborne, and landing in a muddy field. I jumped out into the mud to check on the child in the carseat in the back. His eyes were big as saucers and transfixed on the empty seat next to him. I kept saying, “Are you okay, honey?” Finally he said to me, “Daddy, look at the angel! … What’s the angel’s name?” And finally, disappointedly, “Where did the angel go?” He continued that question until we got home and for weeks thereafter.

Did he see or experience something I could not perceive, or was it just a child’s imagination? And why, precisely in a time of danger, did he claim to see an angel? I saw nothing, but I’m not sure that he didn’t. In fact, I rather hope that he did, as one of those manifestations of what we proclaim to believe in, “all things, seen and unseen.”

With the three toddler grandsons, in just the past three months we’ve experienced the following. I’m pushing a stroller with the twins and we’re singing ABC’s, and one abruptly stops and says most sincerely and urgently, “Opa, I need to be closer to my God!” Without missing a beat, the other twin echoes, “And I need to be closer to my Jesus!” And we talk for quite some time about how Jesus is with us, only to arrive back at the house and Twin 2 says, “Will Jesus be with us in our house?” “He will,” I assure him. So he ponders a bit and asks, “Is that Jesus’s car?”

Now the little girl can’t talk to us yet. She’s almost eight months old. But as I hold her I wonder, “What do you know that I’ve forgotten? How can I keep you—how can you keep me—from forgetting?” I watch them and listen to them and sometimes, a place deep inside of me stirs, remembers something that’s still there that, for whatever reason, I have worked a lifetime to cover up. Simple. Innocent. Known. Full of wonder. Held. Blessed. As is every precious child of God. And though I lose sleep and am worn out every time I’m with them, I am renewed, refreshed, and, regardless of what the future of mainline American institutional Lutheran Christianity might hold, I am hopeful.

God’s got this. God’s got me. God’s got you. Now, to learn better how to pay attention.